Wanted to see if anyone might shed some light on this. This is a fascinating topic for me, and I’m curious how the A380 has been proven to be a moneymaker for the airlines it services, regardless of it being such a beautiful and impressive plane! I’ve gained much knowledge over the years about smaller aircraft overtaking the widebodies in regards to profitability, and their ability to operate many more flights per day to certain destinations based on tarmac space, traffic, etc, and it all makes sense. This being said, I find it very impressive that an airline such as Emirates can operate a strictly widebody fleet (109 A388s and 162 77Ws) and still find a way to be profitable. Would they have to be selling out pretty much every flight to make this feasible? Not quite sure if this is based mostly on tourism or business travel, but the traffic coming into DXB must be incredible for the number of planes and passengers they see per day.

I had the opportunity to fly on one of these a few years back (SFO-FRA via Lufthansa), and I immediately noticed how quiet and comfortable it was. Very impressive in many ways, and I’m sorry to see it go, but it’s understandable. The overall cost-efficiency of the 787 and A350 was just too much to handle I suppose. Hopefully we’ll see many more years out of the current fleet. 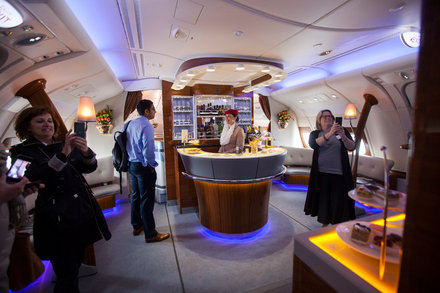 Airbus Retiring Its Jaw-Dropping Giant, the A380, in an Industry Gone Nimble

The European plane maker says it will stop deliveries in 2021 for the jet, which became less competitive as people changed the way they flew.

First I’ve got to tell you you’re the first person I’ve ever heard call the A380 beautiful! That aside there are a few things going on here. Emirates is a govt owned and subsidized airline. The particular govt that owns them is Dubai (you know, the people who literally have money flowing out of the ground) and profitability is not necessarily the goal or even an issue. Emirates offers a high level of service and their image must support that which they do with very luxuriously appointed aircraft. In short no, they’re not filling up almost 300 widebody aircraft nor do they have to.

Second the biggest issue for the A380 has been a second life. For a commercial aircraft to be successful it can’t just be sexy(?) and sell out on the first run. Airlines like Emirates and Lufthansa pride themselves on having all new aircraft. Virtually every aircraft made after it’s initial run with their launch airline gets a second (third or fourth or fifth etc) run after. This has been an issue for the A380. There are virtually no second tier airlines that want the thing. That’s just too many seats for most airlines to fill on a tight budget. Airbus has been offering the A380 out for almost nothing on secondary leases but the operating costs are just too high and there have been few if any takers. That (I believe) is what put the nail in it’s oversized coffin.

Good thing the A350 is picking up the slack in the EADSY (Airbus SE) stocks. That’s a big investment to lose on, however Airbus has the $$$ and status to take that hit and keep moving unlike smaller aircraft companies like Quest (R.I.P Kodiak).

I have never been a fan of the A380. To me it is one of the ugliest airplanes out there, although I never rode inside one.

In today’s economic environment, anything that uses more than two engines is going to have a tough time making it. The four engine airplanes burn more fuel and obviously have more maintenance issues to deal with. When they are full, they make money. But when they are not, it is burning a ton of fuel and losing money like crazy.