I know this is sort of negative, but what is the main cause for plane crashes, and if flown by a better pilot, could they have been prevented? (Nothing against other pilots, of course)

Anatha,
If we knew what caused all plane crashes we could prevent them entirely. Unfortunately we don’t. The NTSB takes months sometimes years investigating crashes and still some come to no conclusion. Of those that have, some were do to pilot error, some environmental, some mechanical… some a combination of a few of these things. The good news is, as these reports come out laws change, training is improved and pilots learn tough lessons making the industry safer so that these kinds of tragedies don’t happen again.

Thank you Hannah, for that feedback. I wasn’t speaking about technical/mechanical issues but rather issues with the flying. For example, pilots forgetting something, or overlooking some setting that causes these devastating events to take place.

So what you’re asking is what is the main cause of crashes caused by pilot error.

“Better pilot” is an interesting idea. What would make one pilot better than another? We all have to pass the same checkrides and get the same licenses and ratings so who’s to say who’s better? That said there is no simple answer to your question. I actually used to teach Human Factors and we’d discuss the causes of many crashes, particularly those that seem easily preventable. The fact is it doesn’t matter how good a pilot you are, pilots encounter many threats and as humans we all make errors (since none of us are perfect, even your “better pilots”). This is the primary reason we have 2 pilots on the flightdeck. The following are 2 facts: first it’s statistically improbable (not impossible) for 2 well trained individuals who are both engaged in a task (flying a plane) to make the exact same error at the exact same time. Second, there are also very few errors that will actually in and of themselves that will lead to a crash. It’s a “chain of errors” that are necessary. So if you put these to facts together we should really should never crash an airplane. But it does still happen and when it does we don’t judge. We simply try to learn from it and do our best not to do the same.

Many accidents are pilot error, many of those have rules or procedures to stop them from happening… but unfortunately humans will always make errors and have accidents, whether in a car or an aircraft.

Friendly Skies on YT did a pretty good video on GA vs Airlines vs Cars. If you want to nerd out here’s the link. 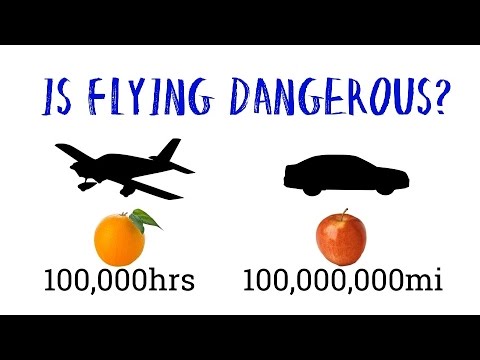 AOPA and many aviation groups advocate for Pilots to have stricter personal safety minimums than what the FAA legally requires.

Airlines and their safety departments often describe this as being Current vs being Proficient. Current just means the pilot meets the legal minimums, Proficient means the pilot can perform the task correctly and confidently without error. Airlines strive for safety and accomplish it through good training, repeated practice, and pilots who put in the effort to maintain proficiency.

It is important for a pilot to take pride in maintaining their abilities/knowledge/CRM skills. The weaker these skills, the more likely the pilot is to “get behind the aircraft”.