As of Friday, I can officially call myself a pilot!

I started the program on 9/26 and 12 weeks later with some weather delays, I passed my private checkride!

Here are a few things I learned and my experience during the private phase.

Before getting into the weeds, I want to emphasize that this training is your $100k investment. The program has an outline but you are responsible for staying ahead of your studies and by ensuring your instructor is staying on top of the ball and scheduling flight blocks even if the weather is marginal. Especially in the beginning of the private phase as the weather will slow you down in the later part. How do you hold your instructor accountable? Sit down with your instructor at the beginning and let them know what your goals are to get through the program as well as setting your expectations. Your instructor can’t control the weather so go easy there but if you feel your quality of instruction isn’t benefiting you, then you need to have that conversation with your instructor. If you still feel your education isn’t on par then you need to speak with your Lead and TSS. I finished ahead of others at my TC because I was always at the TC and was ready to fly.

You’re going to learn new things about yourself like I learned I liked to throw up in the plane! Jk I don’t but that I get nauseous when I’m stressed and when my attention is too focused. I got sick on my 3rd and 4th flight but after kicking off the training wheels, flying became more fun and I was able to relax. From this experience I also learned to check if there were air sickness bags in the plane as part of my preflight. Or should I say you only clean the plane once?

I would recommend taking the bull by the horns and hopping on the mics as soon as possible because coms are a skill that needs to be practiced by doing. Don’t wait till you’re about to solo to be on the mic. Pro tip: write down the basics of the coms for flying the traffic pattern. Leave the variable information blank on a note card and read off the card. I would say it had taken me longer to solidify my coms because I was trying to go off memory and always was missing something. Especially when I hadn’t flown in a week.

Have a plan for your solo shirt design before you solo. It may be way easier if you’re not artistic to have a shirt designer come up with a design for you and print it on the shirt. Will save you so much time or else you might end up with a backwards letter… 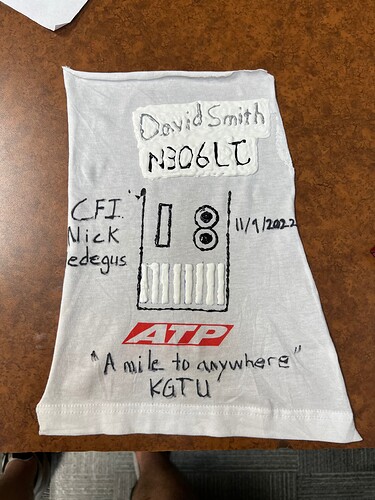 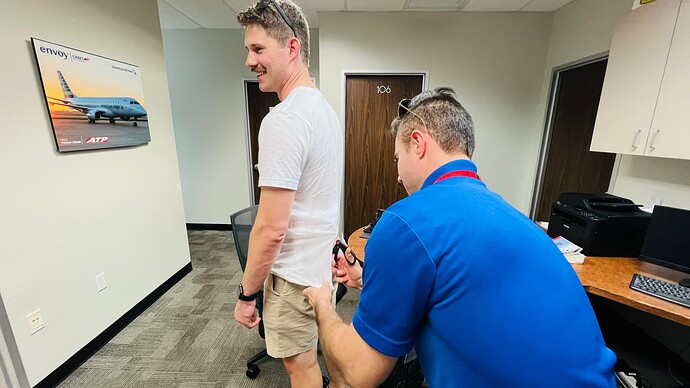 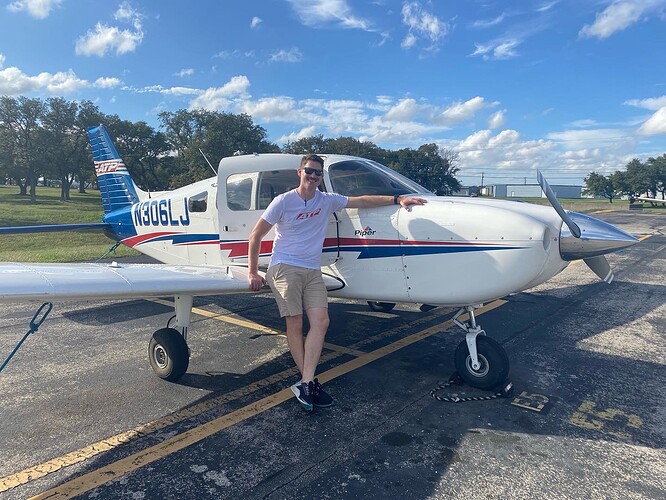 I’m not a superstitious person but there were times when it seemed like my aviation guardian angel was looking out for me by either by lifting or clearing the sky’s when I was about to go fly or by making me need to take a pit stop on my second solo xc. Before proceeding on my last leg of my cross country, I needed to stop at the FBO to use the restroom even though I went before setting off on my cross country. Texted my instructor to let him know I was stopping when he let me know the clouds had came in earlier than the TAF had forecasted. Needless to say had I instead turned around and took off, I wouldn’t had known it till I was halfway there and may have got caught in IMC. Flight Ops had me Uber back to the TC but the hour long Uber wasn’t as fun as flying the last leg.

It may seem like there is a lot of material to cover during the private phase but if you show up, learn and study with others, you’ll find the private oral and checkride are straight forward. All the questions you’ll be asked are given to you before your first day of flight school in the Private Airplane ACS book! I would highly recommend for you to study by starting from the beginning and marking up the pages with your notes.

Everything you’re going to be asked during the Oral portion of your checkride are found in section 1 task A-H of the Private Airplane ACS. The Oral portion of the test is for the Designated Pilot Examiner to determine if you, as a PIC, can determine whether you should go flying or not by following the P.A.V.E. principle. You should prepare for the oral by creating a PAVE checklist and bring it with you to the oral. I created my own Pilot’s Checklist. 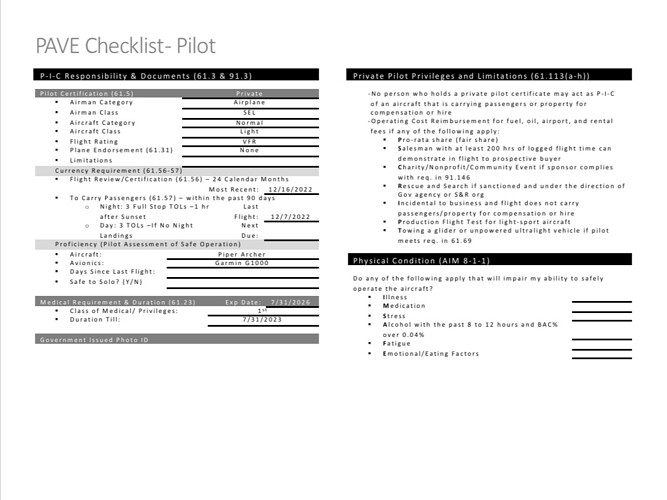 ATP has an Airworthiness Checklist you should reference during the oral.

The enVironment checklist consist of both the ATP VFR Flight Planning Worksheet and the Nav log.

I didn’t have an external factors checklist as it is about human factors and gauging your ADM.

It may not be true for all DPEs but my DPE loved to teach and I walked away from my checkride having learned several new things. For every question he asked, he had a story to tell to go with the question after I had given my answer. I heard stories that the DPE is a plane cowboy and will do some crazy flying with you. But what I found was he just liked to teach even at times when I needed to get a call in. I was mind blown when he demonstrated stalls. I was being too aggressive on my stall recoveries so he kept the plane in landing configuration and showed how all you need to do is lower the nose and still be flying. He stalled the plane, slowly lowered the nose 5 degrees and said “we are stalling now we are flying” and then did it again and said “we don’t have lift, now we have lift.” It seemed like the elementary first step of learning to recover that I hadn’t learned. I felt I trained to be recover fast by getting the nose pitched down, power full and flaps 10 when I should have practiced on relieving back pressure initially and then everything else after I had nailed relieving back pressure. I was worried about my performance landings going into the checkride but they all were SAT on the thousand footers even the power off 180 was to commercial standards! 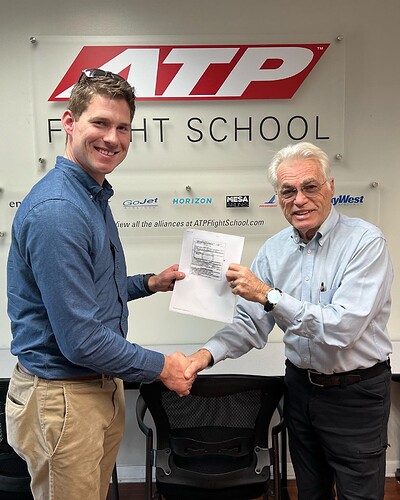 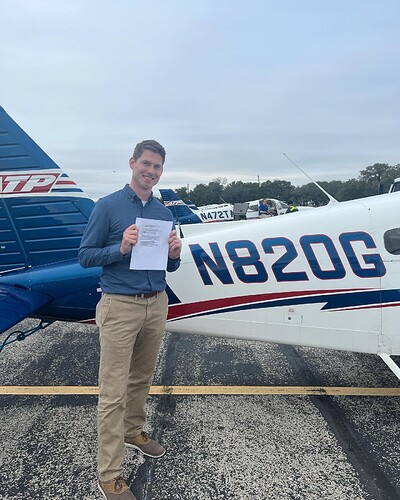 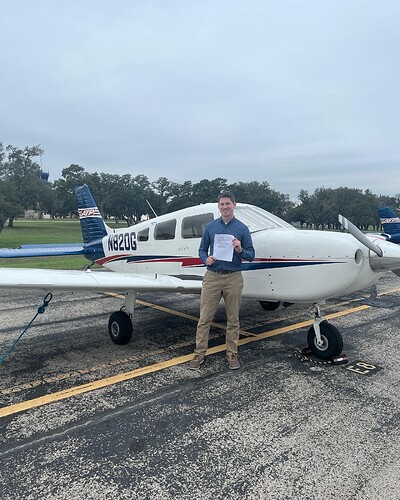 Anyways off to learning instrument!

Congratulations on officially becoming a pilot!

Thank you for the detailed write up. I must admit, I have never heard of anybody hiring out a design for the solo shirt. When Adam and I learned to fly in the era on bi-planes and preparing to bomb Berlin, we just used whatever shirt we were wearing.

Good luck with the instrument phase!

It was a pleasure to read your write up and hearing your experiences sound like you had a wonderful journey so far. It sounds like you are going to really enjoy your Instrument phase and soon after that you will be flying cross-country with a crew partner.

Enjoy your holiday time off here!

The point I was trying to get across was I spent way more time than I wanted to on my shirt and I still made mistakes. Plus the darn shirt paint took three days to dry after I smeared it thinking it was dry. If I had to do it again I would’ve just paid someone.

Congratulations! I started the same day as you and passed my checkride just slightly before you on 12/6. Now it’s time to buckle in for instrument!

Congrats to you both! Best of luck in the instrument phase. It’s a completely different kind of flying.

Please continue to check in with milestone events! We love to hear of your successes!

Congrats on passing your checkride earlier this month! Goodluck to you as well in your Instrument phase.